Without an implicit rate defined in your operating lease, ASC 842 requires reliance on an incremental borrowing rate; however, calculating an appropriate rate is not as straight-forward as it may first appear

You have finally finished implementation of revenue recognition requirements under ASC 606 and are just starting to consider changes to operating lease recognition prescribed by ASC 842. As you are likely aware, ASC 842 requires the recognition of operating leases on the financial statements, a change from previous requirements which allowed for operating leases to remain “off-balance sheet.” At first glance, the guidance appears familiar and similar to language prescribed for capital leases. Hidden among the nearly 200 pages of ASU No. 2016-02 Leases (Topic 842), however, is a requirement, and vague instructions, for determining an appropriate incremental borrowing rate with which to determine your lease liability. For some companies, the lease liability could represent the single largest liability on the balance sheet, the calculation of which will likely receive significant scrutiny by auditors and regulatory authorities.

BVA has extensive experience with credit analysis and is ready to assist you by providing an independent third-party analysis to assist with the determination of appropriate rates for leases of varying terms. The following provides an overview of ASC 842 and BVA’s framework for consideration and calculation of the incremental borrowing rate as required under ASC 842.

To increase transparency for financial statement users and enhance comparability with international accounting standards, the Financial Accounting Standards Board amended the Accounting Standards Codification by adding ASC 842, Leases in February 2016.1 The most significant change from previous guidance is the requirement that lessees recognize lease assets (i.e.,right-to-use assets) and lease liabilities on the statement of financial position for those leases classified as operating leases under previous standards.2

Accounting Standards Update No. 2016-02 (“ASU 2016-02”) requires that a lessee measure the following as of the commencement date of the lease: (1) the lease liability at the present value of the lease payments not yet paid, discounted using the discount rate for the lease at lease commencement (described below) and (2) the right-of-use asset.3 To calculate the lease liability, a lessee should rely on the rate implicit in the lease when that rate is readily determinable.4 Alternatively, a lessee is required to use its incremental borrowing rate (“IBR”),5 defined as follows: “[t]he rate of interest that a lessee would have to pay to borrow on a collateralized basis over a similar term an amount equal to the lease payments in a similar economic environment.”6

To calculate the lease liability, the specific business or legal entity that is considered the lessee must first be identified.  For companies with multiple legal entity lessees, current market opinion suggests that:

Once the lessee and responsible business or legal entity are identified, the discount rate for the lease can then be determined.  In instances where the rate implicit in the lease is not readily determinable, the IBR must be calculated.12 The IBR must reflect the rate at which the lessee could borrow an amount equal to the lease payment in the same currency, over a similar term, and with similar collateral as in the lease.

Current guidance allows for the calculation of the IBR based on an analysis of required rates of return on instruments of comparable risk, if available, or the analysis of the lessee’s actual cost of borrowing. As truly comparable instruments within the company that possess defined rates are often unavailable, the proposed methodology below focuses on a credit analysis and suggests a methodology permitting the application to leases of varying terms.  For entities with publicly traded debt, the implied yield may provide a meaningful benchmark for consideration, but differing lease terms may necessitate the calculation of an IBR using the methodology described below.

CREDIT ANALYSIS
The credit rating of a lessee can be utilized to determine the applicable spread and IBR at which to discount a lessee’s future lease obligations.13  Thus, for lessees without a credit rating, the first step in determining the appropriate IBR is to perform a credit assessment of the lessee.  Two key areas of any credit assessment include an industry analysis and a financial analysis of the relevant entity.14  The financial analysis of the lessee should include a traditional ratio analysis, analyzing ratios significant to the specific industry in which the lessee operates.15  Figure 1 below presents a sample credit assessment of a hypothetical lessee whose assessed credit rating based on the relevant financial metrics is BB. This ratio analysis is based on the comparison of the hypothetical lessee’s credit fundamentals to those of comparable companies with publicly rated debt. 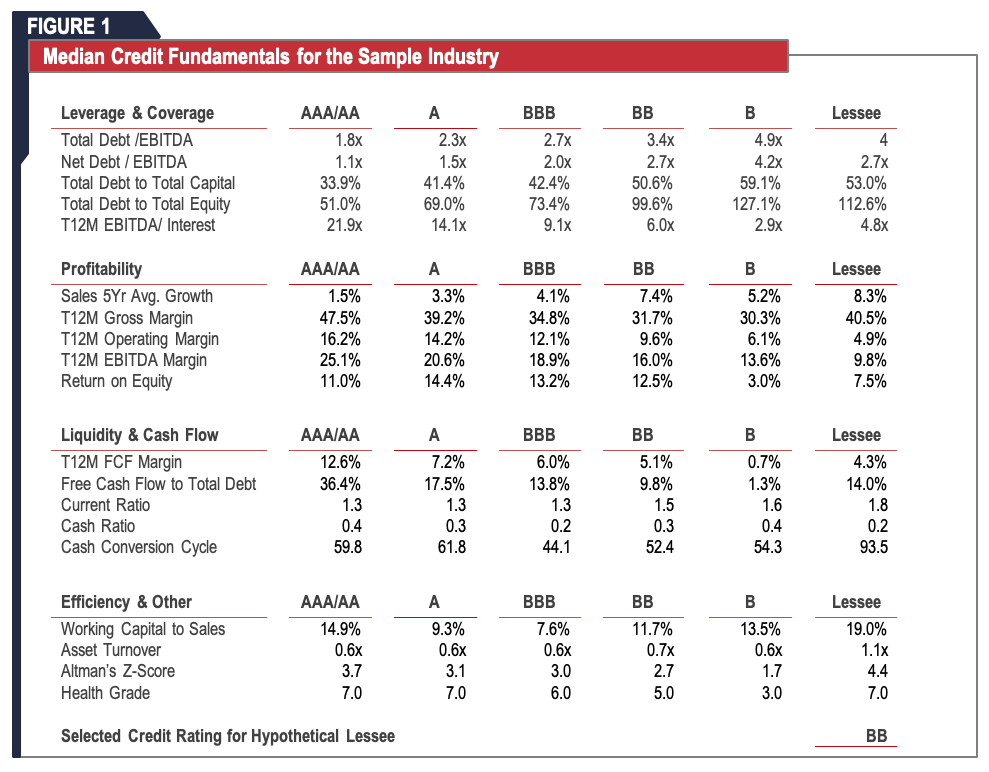 The traditional ratio analysis presented above combined with consideration of relevant nonfinancial factors will result in the selection of the most applicable credit rating for the lessee.16 The results of the credit assessment can be used to estimate the appropriate spread based on the yields commanded in the market by bonds with similar credit ratings.17 One drawback to this approach is the requirement set forth in ASU 2016-02 that the IBR selected be the rate a lessee would pay to borrow on a collateralized basis, whereas most publicly rated debt on which the credit assessment is based is uncollateralized. Thus, an upward adjustment to the lessee’s implied credit rating would be necessary to account for the difference between the yield on secured and unsecured debt.

An appropriate measure to use in determining the applicable spread is the option adjusted spread (“OAS”).  Frank J. Fabozzi, (a Professor of Finance at EDHEC Business School) defines the OAS as “the fixed spread (usually measured in basis points) over the benchmark rates that equates the output from the valuation process with the actual market price of the security.”18  Utilizing the OAS allows for a more accurate comparison of fixed income securities by adjusting for the impact of any embedded options.19  Once the appropriate OAS is determined, the spread can be added to a benchmark risk-free rate to determine the IBR of the lessee.20  The appropriate risk-free rate to utilize will be determined based on the remaining term of the operating lease and may be based on U.S. treasury bonds or LIBOR.21  Figure 2 below illustrates a hypothetical credit spread for BB-rated corporate debt. 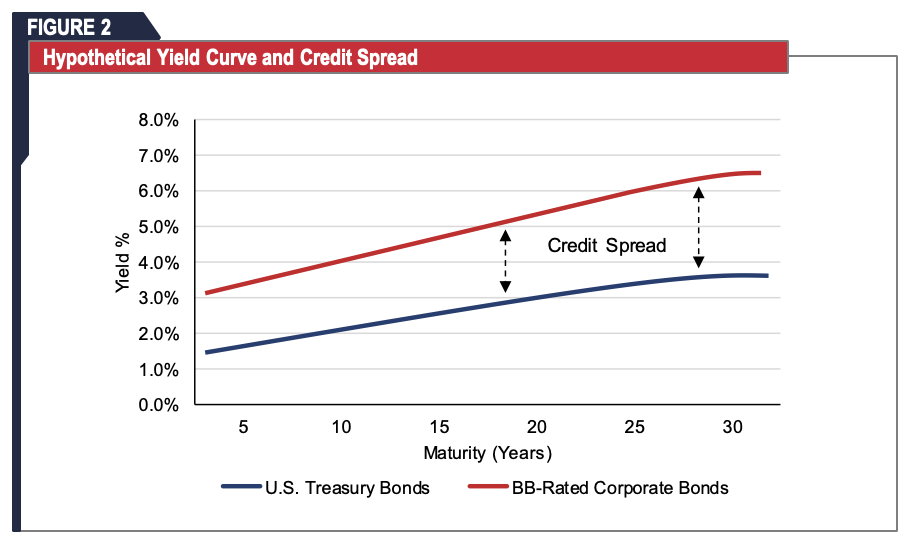 Certain exceptions apply to the application of ASU 2016-02.  Specifically, for short-term leases,22 a lessee may elect not to recognize a right-of-use asset and lease liability on the statement of financial position.23 As an alternative, a lessee may choose to recognize lease expense in profit or loss on a straight-line basis over the term of the lease.24 Additionally, private companies are permitted to make an accounting policy election to utilize a risk-free rate, using a period comparable with that of the lease term, to calculate the lease liability associated with its operating leases.25 However, utilizing the risk-free rate results in a lease liability potentially significantly larger than the liability recognized using the lessee’s IBR.

The impact of lease capitalization on the balance sheet and key financial metrics can be significant, particularly for entities that employ substantial operating leases.  Therefore, a company’s handling of its lease accounting pursuant to ASC 842 is likely to draw significant attention from auditors and even regulatory agencies.  Since many companies do not have publicly traded debt, “Level 1” inputs for estimating the appropriate IBR are not available.  Even for those that do, while the implied yield on a lessee’s publicly traded debt may provide a meaningful benchmark for consideration, differing terms may still necessitate the calculation of an appropriate IBR utilizing the methodology described above.  Furthermore, while this proposed methodology applies for investment grade or slightly below investment grade debt, we recognize that non-investment grade debt securities have yields that would differ from an appropriate collateralized borrowing rate and additional analysis may be required to determine an IBR.

Many companies lack the resources, time, and/or experience to perform a supportable credit analysis in order to determine the appropriate IBR to discount future lease obligations.  A third-party valuation firm with deep experience in performing these analyses will allow companies to resolve their lease accounting questions more quickly and accurately, resulting in a smoother and potentially less costly process with their auditors.

4 Ibid., at pp. 99 and 103.  The rate implicit in the lease is defined as “[t]he rate of interest that, at a given date, causes the aggregate present value of (a) the lease payments and (b) the amount that a lessor expects to derive from the underlying asset following the end of the lease term to equal the sum of (1) the fair value of the underlying asset minus any related investment tax credit retained and expected to be realized by the lessor and (2) any deferred initial direct costs of the lessor.”

5 Ibid., at p. 103.  The discount rate for the lease initially used to determine the present value of the lease payments for a lessee is calculated on the basis of information available at the commencement date.

22 Accounting Standards Update No. 2016-02, “Leases (Topic 842),” February 2016, at p. 100.  Short-term leases are defined as “[a] lease that, at the commencement date, has a lease term of 12 months or less and does not include an option to purchase the underlying asset that the lessee is reasonably certain to exercise.” 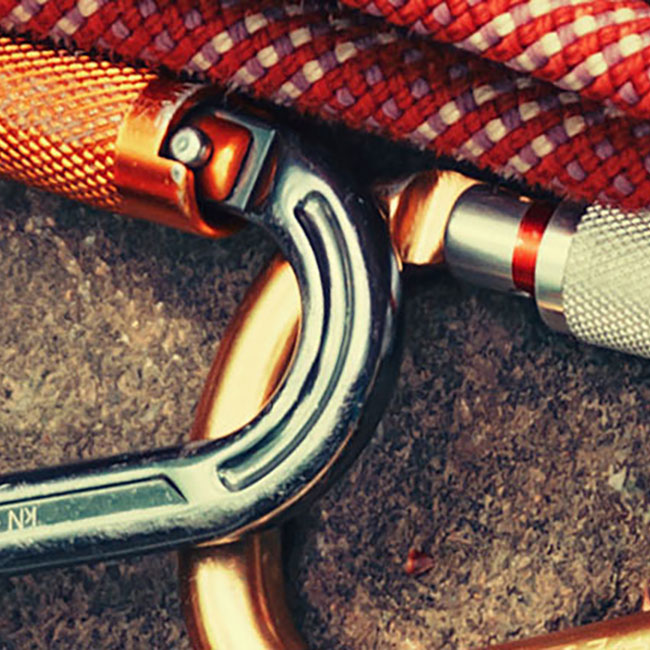